I find another of my happy places by escaping into the World of Sport; no not Dickie Davis (one for you teenagers there), into Lilly’s World of Sport.

Now I love sport, not everybody does. Please forgive me if I’m wrong, but I do perceive that it’s a subject that many Trans Women are reluctant to talk about. Perhaps feeling sport is part of their past lives. Or is sport still considered un-feminine? Sadly it is true most young women stop playing sport when they leave school.

Well in this article I’m going to try to prove that women and sport really do mix, by telling the story of a few of my sporting heroes. Five women who are also both incredible competitors and beautifully feminine. These girls certainly can!

Why does sport matter to me so much. Well I am a competitive animal, it’s in my genes (size 12 from Primark); both competing and spectating satisfy that urge. I believe that, particularly for young people, learning to deal with the ups and downs of competitive sport, is a powerful way of learning how to cope with the vagaries life. A cliche I know, but learning to lose with grace is such a valuable life skill. It can hurt like anything inside but smile on the outside. Anyway sermon over, you can come out now, here are some my heroes…

Jessica Ennis-Hill – oh my goodness, Super Saturday 2012 in the Olympic Stadium. I was there. Why? To see Jess, no not Mo, but Jess. Three years before when I made my ticket selection for the ballot, I’d choosen this night as it contained the final event of the Heptathlon, the 800m. At this point Mo was an also ran, Jess was a World Champion and favourite for Gold. Jess didn’t let us down, withstanding the extreme pressure of being ‘The Face of Games’, she delivered. Blessed with amazing determination, strength and resilience, Jess produced personal best after personal best, to lead the competition into that last event. On that magical evening, in front of 80,000 people, Jess took the lead rounding the last bend and crossed the line to win a glorious gold. In the stadium, we all got a little over excited, hugs (remember them?) all round. I give you Jess, a beautiful, petite woman; now a Mum, who made herself the best all round athlete in the world. What a role model for girls and boys.

Kelly Smith – the greatest England footballer you have never heard of! “Lethally quick, bountifully gifted”, Kelly a forward, scored 46 goals in 117 appearances for England, and enjoyed a highly successful club career at home and in the States.

Over the last 10 years women’s football has at long last come to the fore. But why is the women’s game always in the shadow of men’s football? Well for a start men banded it! Yes in 1921, despite being more popular than some men’s games, women’s football in England was halted when The FA outlawed the playing of the women’s game on Association members’ pitches. The FA said that “the game of football is quite unsuitable for females and ought not to be encouraged.” This ban was in force until 1971. It has taken 50 years for the female game to begin to catch up.

Kelly faced discrimination too, aged seven, with no girl’s teams in her local area, she played in a boys team, until other boy’s teams refused to play Kelly’s team; Kelly was just too good! Kelly’s magnificent career was ended by injury, just before the game came to real prominence (now shown regularly on the BBC), which is why Kelly is not a household name. The best England striker of the modern era? Shearer, Lineker, Kane, Smith…. 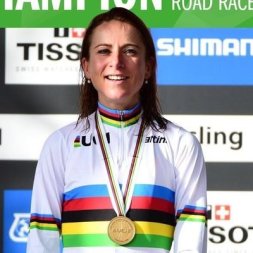 Annemiek van Vleuten. Picture this, the women’s Olympic Cycling Road Race, Rio 2016. The course included a fast, fearsome, twisting down hill section that left no room for error. Riding flat out was not for the faint hearted, only the very brave. Leading the race was Annemiek, she had broken away from the peloton and in trying to maintain her lead and she was going for it. Oh no! Annemiek made a tiny mistake and the next second she was bouncing down the road like a rag doll, bike flying through the air! The world held it’s breath, Annemiek didn’t move for a long time, it took an age for medical help to arrive. The TV cameras held back just in case…..horrible.

Claire Williams. Motor racing is my sport, I grew up with tales of Nuvolari, Fangio, Moss and Clark, I raced karts for five or so years in my late teens. Motor sport is really a world of men! The women’s role was purely to look pretty or make the tea. Sure there were a few women drivers, even some who raced Grand Prix cars like Lella Lombardi and Divina Galica, Michele Mouton was almost world rally champion in the 80’s, or before the war, Kate Petra was one of a number of women who raced around the awesome outer circuit at Brooklands. Women are now starting to have some impact on the sport, particularly on the engineering side of the teams. Claire Williams is team principal of one the most famous GP teams, a role that comes with huge amounts of responsibility and pressure, not least keeping the company founded by her father, alive in an ultra competitive world. Hopefully Claire can steer the team back to the podium very soon, perhaps with a female driver called Jamie Chadwick!

When I was growing up, I never imagined the women could participate in contact sports such as rugby and boxing. At school, girls played hockey and netball, boy’s didn’t.

Margaret Alphonsi MBE is an English former rugby union player who played as a flanker for Saracens and England before retiring in 2014. She has one World Cup winners medal and seven from the Six Nations, and was inducted into the World Rugby Hall of Fame in November 2016.

Maggie can now be seen and heard regularly as a pundit and newspaper columnist, even commentating on the mens game! Inevitably, she has faced sexist and racest comments but Maggie’s calm authoritative manner makes her one the most respected voices on the game; a game that is now open to all!

So what’s next? Trans sports women? An openly gay premier league football? Well the former is a hugely nuanced discussion for another day, the latter, any male professional football who came out as gay would be a hero!

It not the wining, it’s the taking part and above all, having fun

On a final note here is Lilly racing karts in her late teens.

3 thoughts on “Escape to the World of Sport”