Escape into art? You must be pulling my leg Lilly, isn’t that a little highbrow? Well exactly; thinking of my younger self I was something of a philistine, certainly where art and poetry concerned. Truth be told, little Lilly as well as being a tad spotty, was anti art! Maybe that was the punk in me; I saw the world of art as too establishment, too much about money, almost, too intellectual. Whilst some of that is true, I was a silly girl for not being more open minded. That’s the key to art, open your mind and invest time to find what you like. It will be time well spent.

Art can be all around us. For example, I overlooked the art that was all over my teenage bedroom (no I’m not going to tidy my room Mum!) ; the art of record sleeves. This was brilliant and accessible art. The sleeves of vinyl albums remain magnificent, and also wonderful badges of office; much like a modern day book shelf on a Zoom call. How many times did you strut to school or promenade around town on a Saturday, with ‘Dog of Two Heads’ or ‘Led Zep IV’ tucked under your arm? Yes, look at me! I’m making a statement here! Incidentally that’s how Keith Richards bumped into Mick Jagger, Mick was getting of a bus with some blues 78’s under his arm; making a statement! It certainly got Keith’s attention.

So be brave and make a little journey with me to an artistic escape. There lots of twists and turns, and little places to lose yourself. A gallery or museum are wonderful places of refuge and reflection. I can’t wait to meet you there after we escape from lockdown.

On this escape, I have chosen five female artists. But who are your favourites? Do you favour a pile of bricks, Impressionist beauty, Pre-Raphaelite mysticism, a dead sheep or two and biblical text brought to life. Whether you choose cubes, stripes, splashes or dots, I’d love to hear from you. 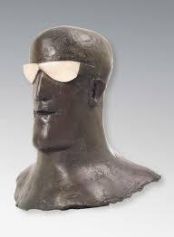 Living were we do, we are so lucky to have The Sainsbury Centre at the UEA on our doorstep. This wonderful Norman Foster designed space, houses the amazing personal art collection of the Sainsbury family, and also plays host to many special exhibitions. In the ‘old days’, I had started to become a frequent visitor, often accompanied by my art partner in crime Serena. Such an exhibition introduced me to the work of Elizabeth Frink the Suffolk born sculptor and printmaker.

Man, either as victim or aggressor, was a dominant theme throughout Elisabeth’s work. In the late 1960s she embarked on a series of male busts in which the eyes are concealed by sinister, polished goggles. The obscured identity of the person behind the goggles creates a sense of menace and aggression, presenting an archetype of man rather than an image of an individual. These enormous pieces, known as ‘The Goggled Heads’, are simply breath taking and deeply moving. Why? I just can’t say but they stirred something in my soul.

Elisabeth considered these busts to be her comment on the world’s inhumanity, and said later that ‘they became a symbol of evil for me’. Elisabeth’s work is incredibly haunting, it will stay with you. 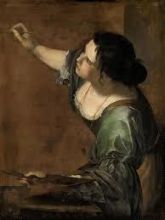 In 17th-century Europe, at a time when women artists were not easily accepted, Artemisia was exceptional. She challenged conventions and defied expectations to become a successful artist and one of the greatest storytellers of her time.

Artemisia painted subjects that were traditionally the preserve of male artists and for the male gaze; transforming meek maidservants into courageous conspirators and victims into survivors.

Artemisia currently has a major exhibition at London’s National Gallery featuring two versions of her iconic and viscerally violent ‘Judith beheading Holofernes’; as well as her self portraits, heroines from history and the Bible. Fingers crossed I can get to The National in 2021, would you like to join me? 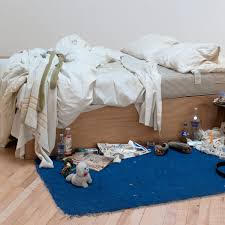 Tracey is one of the most prominent and controversial living British artists, part of the new wave who came to prominence in 90’s. Most of her works are autobiographical and revolve around her personal traumas growing up in Margate (have you ever been to Margate? I spent some of my childhood there, that’s why I’m odd). Tracey uses a wide range of media, including drawing, video, and installation art, as well as sculpture and painting.

Her work can be shocking and explicit. ‘Everyone I Have Ever Slept With 1963–1995’, a small tent with the appliquéd names of, literally, everyone she had ever slept with (my own tent is very much smaller). The installation ‘My Bed’, which displayed not only the Tracey’s own bed but also rumpled bedclothes and what one critic called “uncomfortably personal debris,” including used undies, empty drink bottles, and ‘used’ other things. Money for ‘old rope’? What do you think? I really like this work but wish I’d thought of it first (though my undies are always clean) and, then I could have sold it for a large amount of money to (more money than sense) Charles Saatchi. 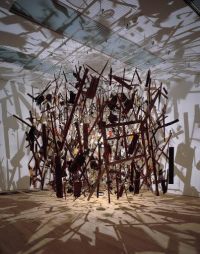 Cornelia is English visual artist, best known for her sculpture and installation art. I first came across Cornelia’s work when I walked into the corner gallery at The Tate Modern, and there before me, suspended from the ceiling, were, what looked like the contents of my shed in an exploded form! That was my introduction to ‘Cold, Dark Matter: An Exploded View’. Actually I wasn’t far wrong, this wonderful piece of visual art was actually Cornilia shed (manufactured specially in Suffolk), conveniently ‘blown up’ by the British Army! At Cornilia’s request, I should add.

For the 1997 Turner Prize exhibition, Cornilia exhibited Mass (Colder Darker Matter) (1997), created by suspending the charred remains of a church that had been struck by lightning in Texas. Eight years later, Parker made a companion piece “Anti-Mass”. using charcoal from a black congregation church in Kentucky, which had been destroyed by arson.

Does this matter? Is this art or is celebrating destruction? Or is just Entropy? You decide. Me, I love it! 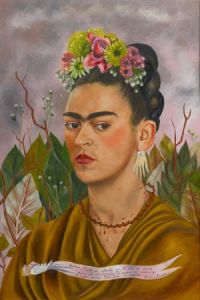 Living a brief wondrous life, Frida was a Mexican painter known for her portraits, self-portraits, and works inspired by the nature and artefacts of Mexico. Inspired by the country’s popular culture, she employed a naïve folk art style to explore questions of identity, postcolonialism, gender, class, and race in Mexican society.

Overcoming childhood polio and a horrendous accident; Frida was very much her own woman, famous for her intoxicating individual style and her defiant idiosyncratic ‘monobrow’ eyebrow(s?).

Frida’s paintings often had strong autobiographical elements and mixed realism with fantasy. Frida has been described as a surrealist or magical realist.

Frida is celebrated by feminists for her depiction of the female experience and form, away from the male gaze. Frida produced beautiful, colourful paintings which I feel you will fall in love with.

I hope I have convinced you that the world of art is a wonderful place to escape. A trip to a gallery is also a good opportunity to get dressed up, look glam, practice the art of makeup, have a meal and that one small glass of wine. Fab.

See you all soon; I’m off now to form a queue outside my doctors for my vaccine jab. Now shall I have the German one, or the American one or the British one? Which arm nurse?

2 thoughts on “Escape to the World of Art”