An occasion, for which I expect we all look forward to with great delight each year, is the evening of Thursday 15th December when twenty one of us celebrated our Oasis annual Christmas meal.

This was our second year at Caistor Hall on the outskirts of Norwich.

With its ornate décor and cosy atmosphere, and the ceiling centre piece of a pair of beautiful crystal chandeliers, it was a splendid venue for such a fabulous occasion.

We started with a pre-dinner drink in one of their cosy lounges, a sort of meet and greet and get to know the newcomers. We all welcomed our newest ladies Stephanie and Glinda. It was also a chance to compare the outfits and who had won the “Most sparkly outfit” this year – Had Beccie done it again!! No chance.

At 8pm, our Event’s Organiser and Commandant, Julia summoned us into the beautifully decorated dining room, the long table laid out to perfection with crackers and place names.

As we all in a rather unladylike fashion, pulled our crackers the evening was off with a Bang!!

Compliments to the chef and the waiting staff for the presentation and speedy service as the food arrived.

With a long table it is always difficult to meet and chat to everyone, so between courses we rotated around the table in a detailed and systematic systems that Julia has spent considerable time planning. It would have been an unrivalled success if only we bothered to listen to her!!

We tend to forget that Rock’n’roll music is essentially dance music, so what a treat the last Oasis night was.

After the usual exemplary delights from Vicky’s Kitchen (Lasagne followed by scrummy desert) the tables were cleared back to make room for a dance floor.

Yvonne Ball, long time friend of Julia, then taught us a sequence of Jive moves and many who started the evening with two left feet suddenly found themselves spinning and twirling their way round the dance floor.

The lights were dimmed and St. Georges Hall was transformed in to a 1950’s Village Hop all to the sound of classic Rock’n’roll tracks.

A special thanks must go to Yvonne’s friends from her Jive club who came along to help us all master the intricate footwork!

If you weren’t there YOU’RE SQUARE!

In show business they always say never work with animals or children.  Well at Oasis never work with technology, because when you want it to work it invariably never does.

Although the Ascot Race Night did not start off well, with the data projector not working, it finished well and everyone had a thoroughly enjoyable time.

In fact it was very cosy, with all of us huddled around a laptop screen. Beccie could have made a fortune selling binoculars (something she’ll look into next year!) and the whole experience gave an air of reality, as if we were really there, struggling to see the horses in the distance.

Most of the ladies were in their enclosures by 7.30pm and once the betting was explained, Oasis money was being exchanged for tote tickets ready for the first race, the Puff and Panter Stakes.

With 28 people attending, once the horses had been prepared in the starting pens at the back of the hall “they were off!”

The evening ‘cantered by’ and soon our ladies were ‘champing at the bit’ for food.

After the “Rhyme Time Handicap Stakes” won by “Smug Bug”, the enclosures were prepared for the high tea provided by our resident chefs Vicky and Ann, while the horses rested ready for the next set of races.

After the “Wacky Races Derby” won by “Hobby Horse” the Ascot best outfit competition took place.  All the ladies taking part had a few minutes to put the final touches to their outfits before parading to the audience.  Competition was feverish, and personally Beccie should have won.  I know Long Tall Sally voted for her, but ‘Nah’ It seems she told everyone she had voted for them as well!

Claire was declared the winner, with Serena and Jenny in second and third place respectively.  Each was presented with a bouquet of flowers, a voucher off admission to Oasis – what more could an Ascot race lady ask for.

And then they were off again, with two more races before all the winnings were added up and Stephanie was declared the winner.

Anyone for G&T to celebrate the Queen’s 90th Birthday

At some point during the 19th Century, just after Oasis was formed, an enterprising colonial official combined their daily dose of protective quinine tonic ( to control malaria) with a shot (or two) of gin and the rest is history.

Oasis cannot thank Hannah enough for the talk she did at our last Oasis called “Mothers’ Ruin”. 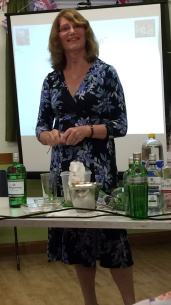 To start, we were all confronted with William Hogarth’s famous print ‘Beer Street and Gin Lane’ ,with the saying

“Drunk for a penny, dead drunk for twopence, clean straw for nothing.”

A great deal was learnt from Hannah’s talk and subsequent demonstration and tasting, and we all came away, some inebriated and others just tipsy, from that part of the evening more informed about how gin became respectable. We all thanked Hannah for her efforts.

We were also celebrating the official 90th Birthday of her Majesty the Queen, and as befitting on such occasions and with the chance of getting into another outfit to win a prize we held a fashion parade!

All the usually culprits were there and the theme was definitely very patriotic with spectacular use of red, white and blue, outer and underwear, so I’m told!

The voting, by members of the Oasis, was both rigorous and fair and the winner, by a very close majority of 51% to 49%, was the gorgeous Vicky, with runners up of Rosie and Serena.  Beccie asked for a re-run of the vote but no one was interested! 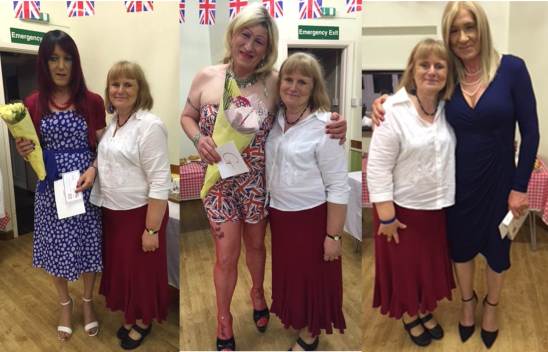 All received money off vouchers to Oasis and flowers/chocolates.

Well what an Oasis party it was!!

It was good to see so many ladies taking the trouble to arrive at Oasis in their fancy dress altered egos. I understand some of the ladies spent months in the planning and execution of their outfits, whereas others just happen to have the outfit at the back of the wardrobe ready for such an event!

In one corner Mary Quant and Sister Joy were deep in religious conversation while The Big O, Roy Orbison and the Diva from the Venetian Lagoon looked on.

In another corner of the room Cruella de Vil and Dr Frank n Furter were in discussion with Frenchie the Parisian Can-Can girl on techniques of breading dogs for their fur.

Strolling in through the door was the pageant queen, Miss Sweet Corn 1939 with Jessica Rabbit. Flapper girl Jenny was in deep conversation with the Gruesome Twosome.

Wonder Women, Beccie, the demi-goddess and worrier princess of the Amazons, was on the door preparing herself to win the best fancy dress by checking out the competition.

As usual Vicky the naughty schoolgirl was, serving her detention, in the kitchen preparing the food.

Oasis welcomed the return of Long Tall Sally and Joanna, and introduced three new members Dawn, Vanessa and Rachel to the group.

The food was up to its usual and excellent standard provide by our two chefs, Vicky and Ann.

After the sumptuous meal came the fancy dress parade. Judging was done by the assembled audience based on the tried and tested Eurovision Song Contest format, fair and no political voting! 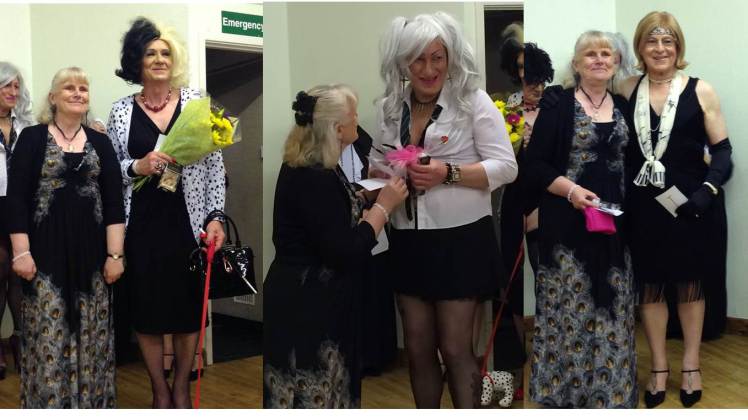 After much deliberation the winner, Cruella de Vil and her scruffy little mutt had clinched it, receiving a luxury bouquet of flowers (from the local garage!) and a voucher from Winalot for kennel accessories!

Wonder Women was in the kitchen all night cleaning the dishes and all she got was a wet tea towel but naughty school girl Vicky gets second place, a fascinator and chocolates. There is no justice in this world!

Third place was given to Flapper Jenny who received a scarf and a discount voucher off the Oasis entrance fee.

Wonder woman was last seen in the kitchen slashing her outfit and wrists in tears shouting “Never Never again, nobody loves me!”

A lot happened at our March Oasis.

It was Oasis’s 28th birthday/anniversary.  Started by Barbara Ross in her home all those years ago in support of the Transgender community. For people that knew Barbara, they were touched by her openness and support. Oasis is Barbara’s legacy.

It was also our Oasis “Bring and Buy Big Event”

As I look at the array of paraphernalia that had been set out in the Octagon room, one of the more mature ladies, remarked about “them old days” when the Rag and Bone man on his horse driven cart would go down her street collecting. Being so young myself I had to asked her what “a horse driven cart” was!

Looking around the room it was a collection of “any old wigs, heels, jewellery, clothes and DVD’s”

It seemed like a good idea at the time and I know Vicky, our “ Chef to the Stars” had cold feet but the turnout on the night was fantastic with a range of lots of different items up for grabs.

Although I only made a few pounds and a couple of foreign coins and buttons, some of the ladies made enough to pay the Oasis admission, the bus fare home and a small bag of chips!!  Who could ask for more!

Again all our ladies bought food in, making an excellent spread of savoury and sweet.  It was nice to greet two new people Caroline and Tina. I hope we will see more of them.

A raffle was held to raise money for the Sports Relief. A huge thank you to all the ladies that contributed.  Despite only having a low attendance we managed to raise £50.

It was Oasis Easter as well so as a thank you from Oasis all our ladies received a bunch of daffodils and a chocolate egg.

All in all a lot happened!

People entering the venue were greeted with decorations of an authentic theme from Chinese lanterns, fans, coloured coordinated tableware to interesting facts on the Year of the Monkey.

With an excellent turnout of 36 people, we were also greeted to some fantastic outfits, some of our ladies had gone to a lot of trouble to create the look.

Ann and Vicky prepared and presented some lovely and authentic Chinese food for the savoury and sweet course finished off with Lotus biscuits and Fortune Cookies with their tea and coffee. In fact some greedy people made four round trips to the main course table.   Finally the evening was rounded off with a raffle with some interesting prizes of Chinese music, tea infusion and a chow mein jigsaw puzzle.

Vicky asked the ladies to remember to bring any unwanted goodies to the Bring and Buy sale at the March meeting and to let her know who doing what.

Look out for our 2023 garden visits