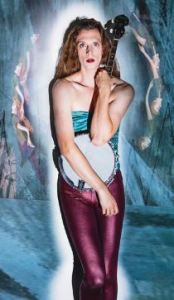 On Saturday 8th February a small group of Oasis ladies went to see “Too Pretty to Punch”, a solo performance by Edalia Day at the Garage in Norwich.

After meeting for a meal at Pizza Express in the Forum, we sat down to a full house at what was an interesting and thought provoking performance with many of the situations Edalia performed ringing true with many of our lives.

She so eloquently talked about not wanting to be put in a box, not having to be labelled as one gender or the other as society wanted. Of her life growing up with continued conflict of having to adopt the male role, but so longing to be in the female role, snatching tiny moments when she could.

What I found interesting was that I’m in my 60’s and yet Edalia, half my age was still encountering the binary nature of how people and society labelled us. I thought we had moved on from this, or is it so ingrained things might never change!

Her performance demonstrated participatory theatre at its best, intermingled with clever interactive visual stimuli. There were even subtitles to help the show flow.

After the show we stopped off for a coffee and more chat at a local hostelry.  There were two ladies who sat in the corner by us, who on leaving asked us if we had heard of the “Way Out Club” in London, as her good friend was Vicky Lee,who runs it.

You just never know who you’re going to bump into in Norwich!

Norwich was the start of Edelia’s countrywide tour. Click on this link to find out more.

Our next meeting at Oasis is on Saturday 15th of February. Click here for more information. 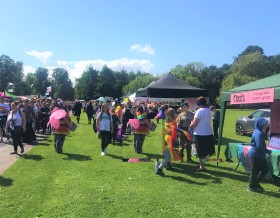 It was by the skin of our teeth we were at King’s Lynn Pride. I had given up on getting a response and then, 10 days before the event I got a call asking “are you coming?” Well, yes! Panic. Try to organise support. Amazing response. Davina, Beccie, Michelle, Petra, Lilly and Rachel all turned out to support the Oasis stand at our first King’s Lynn Pride.

Now, Dee and I were first to arrive to set up the stand (a gazebo and display stands as we were outside on ‘The Walks’) so by 11.00 we were good to go. We then got a call from Lilly to say she, along with Rachel and Michelle had just arrived at Kings‘s Lynn railway station and had joined the Pride march to The Walks. My iphone weather app assured me there would be NO rain – but it was absolutely hammering down! Dee and I were safely under the gazebo but Lilly, Rachel and Michelle were sharing one (very small) umbrella – oops! 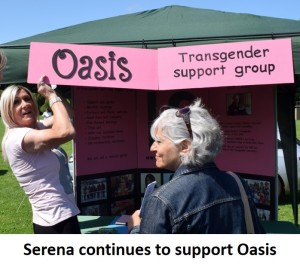 However, the sun came out, they dried out, and it was a gorgeously hot, sunny afternoon. Lots of people visited us on the stand, including some of our Oasis ladies, Angela, Anne, Melissa and Vicky. Vicky runs a guest house minutes away from The Walks and has offered us changing facilities and parking for next year – brilliant.

We spoke to lots of people, both trans and cis, who were all very positive, and made some useful contacts for the future. The general consensus was that it was a really enjoyable day and we will definitely be there next year. 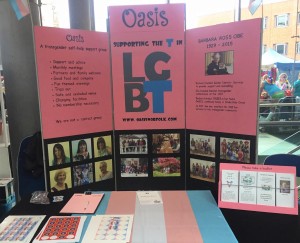 This is a huge thank you from Serena, Phyllis, Geri, Dee, and Jenny to all those lovely ladies who came along to Norwich Pride and helped to make it another really successful Pride day for Oasis.

Even more people attended the event this year and those on the Oasis stand didn’t stop talking and handing out leaflets and stickers all day. Lilly stepped up to the plate and led the Oasis team in the march, proudly waving the pink, blue and white transgender flag. Although it was overcast, it did not rain and the cloud cover kept us cool.

As in previous years, our stand was next to the Mancroft Advice Project. This is a really useful alliance because, between us, we are able to offer advice and support to transgender people from the age of eleven upwards. MAP previewed their new film and accompanying booklet, ‘Understanding and respecting differences’, made possible with funding from the Barbara Ross Association and Jenny, one of the trustees, played a major role in facilitating this. 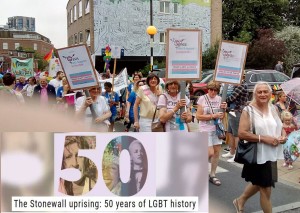 A useful outcome of the day is networking with other organisations. I made contact with a research scientist at the UEA and hope to be able to contribute to her research into the biological basis of being transgender. Norwich library are compiling a sound archive of Norfolk trans stories and I hope to contribute to this. The ‘Schools Out’ organisation is proposing to choose Barbara Ross as one of their ‘Four Faces’ illustrating LGBT (Barbara was, of course, a passionate trans ally).

It was disappointing that the Pride Guide did not mention Oasis. The Mancroft Advice Project was mentioned aimed at 11-25s but for the rest of us, we were pretty much ignored. This is a problem that needs addressing and rectifying for Pride 2020. Your organising committee will be proactive in making this happen.

After a long and exhausting day, twelve Oasis ladies enjoyed a relaxed and enjoyable meal in Pizza Express – a perfect way to end a really enjoyable day.

In memory of the late Barbara Ross OBE, and made possible by a donation from the Barbara Ross Association the film project ‘Norfolk Trans Youth: Understanding and Respecting Differences’ and accompanying booklets, led by young people from Evolve (MAP’s trans youth support service in Norwich), was launched at Norwich Pride, on Saturday 27th July 2019.

Our filmmaker was Nicole O’Reilly, a young Edinburgh-based trans woman, and creative genius.

The film is a documentary in two parts and we aim to screen as much of this as possible at Norwich Pride on Saturday.  It will be made freely available online as soon as possible after Pride, along with a PDF version of the booklet which will be promoted  in schools, medical services, local authorities and other organisations.

Jen Alexander, Gender Identity Practitioner, will be hosting a private screening of the complete film later this year. Date to be announced.

Following a visit to Lowestoft Job Centre last year, I was asked to give a talk to the staff at Lowestoft Job Centre as part of their staff development programme. We arranged 24th July months ago, not knowing it would be one of the hottest days of the year. It meant an early start from Norwich to arrive in Lowestoft for the 9-10 am session. As I drove over, the thermometer in my car read 25C deg by 8 in the morning – thank goodness for air con!

My brief was to cover LGBT+ definitions, terminology, how to address people, what it’s like to be transgender, transition, documentation, the legal position and being trans and transitioning at work.

Having been to Lizzie’s funeral the week before, I dedicated the talk to her.

One of the advisers spoke to me afterwards and said that, although she had half a dozen young trans clients, she had never heard of the Mancroft Advice Project even though they have an office in Great Yarmouth. That is why it is important to get out there and spread the message.

The talk was well received with some good feedback.

Click on this link to read a transcript of the talk. 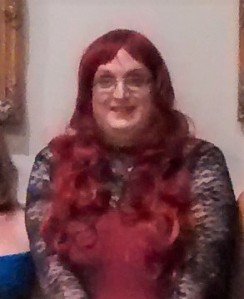 It was with both shock and great sadness when I heard that Lizzie Vaughan, one of our Oasis ladies, had passed away on 18th June.

Lizzie first contacted Oasis around August 2015, and arranged to meet at the Bicycle Shop in Norwich.

She wanted to join our group desperate to express her female side, which she had hidden for so long, initially with a view, then to be a bridesmaid at a friend’s wedding.

From our first meeting Lizzy was a bubbly, joyful person and a great asset to our group.
She stayed with us at Oasis for several years, attending when she could and building her confidence. She embarked on her transition journey and became involved in Norwich Pride and the Pride Choir and was out and proud.

Her thespian yearning led her to the Sewell Barn Theatre, as an actress of many roles as well as backstage and front of house. It was always nice to see her from behind the bar on my many visits to various productions.

We only chatted a few weeks ago when she was performing with the Pride Choir at the Stody Lodge Rainbow Day in May.

Oasis sends love and affection to all her friends and family in this difficult time.

She was a one in a million and will be greatly missed. It is a very sad day for our LGBT community.

Supporting the “T” in LGBT 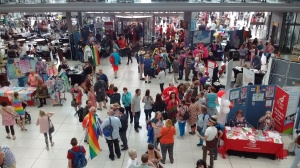 Saturday, 29th July 2017 was Norwich Pride day. It dawned bright and sunny – good news for the speeches, march and entertainment planned for the afternoon. The Forum was a hive of activity from 8 am onwards as a wide range of organisations set up their stands and displayed their freebies and items for sale.

This year Oasis joined forces with the Mancroft Advice Project (and their sub-group Evolve) to provide help and advice to transgender people covering a wide age range. From 10 – 12.30 the atrium was heaving with people wearing a variety of amazing outfits. We were approached by a large number of people, especially young people, seeking help and advice about gender and sexuality. For those in the 14-25 age group we were able to point them in the direction of Jen and Linda from Evolve. For older people we gave them information about our Oasis meetings and I am sure we may see one or two new members. 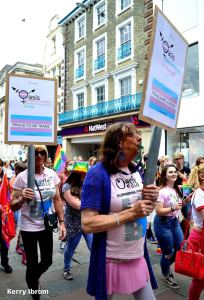 Beccie And Claire represented Oasis on the march carrying placards declaring ‘Trans is not a choice’ and ‘Proud to be Trans’. The stand was manned womaned by Phyllis, Jenny, Kate, Claire, Beccie, Rachel, Serena and Michelle. Many thanks to everyone. We were visited by a few familiar faces. It was good to see Gemma, albeit as her male self. She is unable to drive at the moment but hopes to come back in the future. Laura, Anna, Glinda and Carole also dropped by.

Throughout the whole day there was a wonderfully positive atmosphere. It was my first attendance at Norwich Pride and I absolutely loved it. I felt I had been able to give positive help to many people, especially young people, which will hopefully make their next few years less difficult than it was for many of us oldies. If I am able, I will definitely be involved next year.

Thank you to everyone who helped out.